ICT Consulting S.p.A. is a company providing strategic consultancy in information and communication technologies – hence the reason behind the name.

It was founded in 1998 by three professional partners from three generations of Telecommunications’ engineers (Salvatore Randi, Maurizio Decina and Vittorio Trecordi).

ICT Consulting S.p.A. is now a leading company in its own sector and it owes its success to the lengthy managerial experiences of the partners as well as the competences and skills of those people working for the company.

We offer a broad range of consultancy services, all aimed at supporting our Customers in the development and the realisation of projects regarding transformation and efficiency as well as the deployment of convergent fixed and mobile networks and security systems.

We enjoy an extensive coverage of the domestic market and we are proud of our numerous international professional experiences with telecommunications operators and multinational companies. 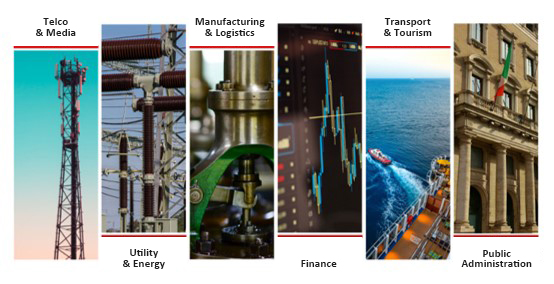 Our clients cover the whole chain of the information and communication technology market – that is, the ICT service providers, the consumers of ICT services (large companies) and the technology vendors.

All the most important Italian telecommunications companies are among our clients as well as international operators, manufactures of digital networking equipment, banking institutes, financial companies, public and local administrations, insurance companies and large Italian and multinational corporate companies.

At the very root of our success is the guarantee of a “tailor-made” consultancy service that combines three key elements:

Our competences and skills in the IT/ICT sector – apart from a strong orientation towards innovation that derives from continual contact with universities (the PoliMI – Milan Polytechnic and the UniBG – University of Bergamo) and centres of learning (the FUB – Fondazione Ugo Bordoni and the Cefriel Research Institute) – have come to fruition alongside the main Telecommunications operators in Italy (Telecom Italia, Vodafone, Fastweb, WIND, 3) and operators (some of which incumbent) in countries such as the United Kingdom, Sweden, Spain, Switzerland.

As well as the highly technical component hailing from the experience accrued by the founding partners, there is also an acute ability to fully comprehend the dynamics of any business situation and to analyse the regulatory repercussions so as to be able to steer the way forward for the client.

In the more specific context of IT/ICT, this focus is translated into an ability to guide the client’s own choices starting off from the definition of the strategies themselves, right up to the design of the particular features of the project, evaluating the technical, economic and financial implications.

Our operative staff is made up of around fifty engineers, all selected with an ICT background and training, in the two offices of Milan and Rome.

The management of the Company comprises following highly qualified people:

Vittorio Trecordi graduated with Honours in Electronic Engineering (with a focus on Telecommunications Networks) from the Politecnico of Milan in 1986.

He took a Master in Information Technology at the CEFRIEL / Milan Politecnico in 1988.

After a brief period spent at Laben and Pirelli Cavi, Vittorio Trecordi became the Technical Director of the CEFRIEL / Milan Politecnico where he dealt mostly with applied research and he produced approximately seventy scientific publications and oversaw more than fifty graduation thesis.

In 1998 he founded ICT Consulting with Salvatore Randi and Professor Maurizio Decina with the aim of supporting companies involved in the development of the telecommunications market following liberalisation. Over the years he has accrued an in-depth amount of experience in the sector of digital technologies, applied to the different market sectors and to society and he has directed countless projects of a far-reaching impact for the most important companies in Italy and abroad.

From 2013 to 2014 he took part in the work of the Extraordinary Commissioner – Francesco Caio, who had been appointed by the Italian Premier, Enrico Letta – regarding the draft of the Broad Band Report which was then presented by Premier Letta in January 2014. Following on from this, Vittorio Trecordi contributed to the draft of the “Italian strategy for Ultra Broad Band”, published by the Italian government on March 3rd 2015.

He is a founding member of ICT Consulting and is today a member of the Board of Directors and he administers company operations.

He was scientific consultant for AT&T Bell Laboratories in Chicago, scientific Director and founder of the CEFRIEL consortium, and Executive R&D Director of Italtel in Milan. Prof. Dècina was a Commissioner of the Italian Communications Authority, AGCOM, President of the Ugo Bordoni Foundation, President of Infratel Italia, and Member of the Board of Telecom Italia, Italtel and several ICT Companies.

Filippo Lucarelli graduated with top marks in Telecommunications Engineering at the Politecnico of Milan. He also has a Master in Information and Communication Technology at the CEFRIEL Research Institute.

He has worked at ICT Consulting for more than 15 years.

He is an expert in ultra-broad band networks and regulatory issues at a domestic as well as an international level. He has successfully managed complex technological transformation projects for large enterprises as well as the re-engineering of organisational processes, re-defining of positioning strategies and the launching of new services for fixed and mobile operators.

Alessandro Soracco graduated with top marks in Telecommunications Engineering at the Politecnico of Milan and has worked at ICT Consulting for more than 15 years.

He is an expert in ICT tender notices and in outsourcing services, and has contributed towards achieving important objectives with regard to the reduction of ICT expenses for a whole host of clients. He has a deep and well-founded knowledge of IT Service Management processes and operators’ business processes, as well as of the related applicative systems. He has successfully managed complex IT Transformation projects with domestic and international operators.

He has been a partner of ICT Consulting since 2008 and today is representative 231 and a relator at the Politecnico of Milan for a large number of theses. He is responsible for Realisation services.